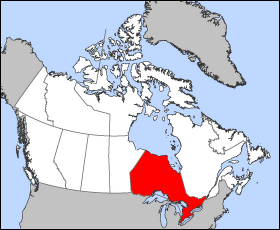 Ontario is a province located in the east-central part of Canada. Ontario is by far the largest province in the country by population (roughly 38% of Canada's total population) and second largest (roughly 17% of Canada's total area), after Quebec, (Nunavut and the Northwest Territories are larger but are not provinces) in total area. Ontario is bordered by the provinces of Manitoba to the west, Quebec to the east, and the American states of Michigan, New York, and Minnesota.

Some notable players from Ontario include

Sanctioning Bodies within the province

Ontario is unique in Canada in that it has multiple sanctioning bodies within the province.

All but one of these regions are members of the Ontario Hockey Federation. That would be Hockey Northwestern Ontario which is responsible for the area west of Sault Ste. Marie (roughly the 85th meridian) at the eastern end of Lake Superior. The Algoma, Kenora, Rainy River, and Thunder Bay Districts make up the region. Due to the remoteness of the area to the main population centres in southern and eastern Ontario; traditionally, it has had closer ties to Manitoba and western Canada. Under the old East-West formats used for national junior and senior level tournaments the region would be bounced between the eastern and western regions depending on how qualifiers were laid out. Due to a small population base (just over 250,000 less than 2% of the provincial total) leagues that have served the region have often relied on multi-provincial (along with Manitoba), multi-country (states of Minnesota and Wisconsin), or even multi-tier leagues (such as Junior, major midget, and university in one league) to create playing opportunities at the competitive level. The organization was originally known as the Thunder Bay Amateur Hockey Association until 1999.

The Ontario Hockey Federation is the parent body to the remaining three bodies in the province.

The Northern Ontario Hockey Association has a jurisdiction that includes Ontario roughly north of a line just south of North Bay and west of a line west of Pembroke. In the west it extends to Sault Ste. Marie. Over the years some of the leagues in the area have also included teams from the upper peninsula of Michigan as members. HNO serves a little under 4% of the provincial population.

Hockey Eastern Ontario represents the part of Ontario East of and including Lanark County, Renfrew County, and Leeds County, but not including the town of Gananoque. The organization was originally known as the Ottawa District Hockey Association as it is the area around Ottawa. HEO serves roughly 10% of the provincial population

This league was formed in 1909 with the Ottawa Senators as an original team. They lasted until the league itself folded in 1917.

Also in 1909 were three other Ontario teams - Cobalt, Haileybury, and the Renfrew Creamery Kings. Cobalt and Haileybury folded after one season, but the Creamery Kings lasted one more year.

There was no Toronto team until 1912, mainly because of the lack of a suitable arena. In 1912-13 there were two Toronto teams - Toronto Blueshirts and Toronto Tecumsehs. The Blueshirts lasted until the league collapsed in 1917. The Tecumsehs were replaced by the Toronto Ontarios in 1913-14, the Toronto Shamrocks from 1914 to 1916, and the Toronto 228th Battalion in 1916-17.

The Toronto Arenas were an original member of the league in 1917. They were only a temporary franchise and folded at the end of the NHL's second season. They were replaced by the Toronto St. Pats in 1919. This team was renamed as the Toronto Maple Leafs in the 1926-27 season.

The Ottawa Senators were also an original member of the NHL and lasted until 1934, when they were moved to become the St. Louis Eagles.

The Hamilton Tigers were moved from the Quebec Bulldogs in 1920. The team lasted until 1925 when a player strike doomed the team. They were moved to New York City to become the New York Americans.

The Ottawa Nationals were one of the original teams in 1972-73. They moved the next season to become the Toronto Toros who lasted as such until 1976. They then moved to become the Birmingham Bulls.

The Ottawa Civics lasted for a short time in the 1975-76 season before folding. They had been the Denver Spurs.