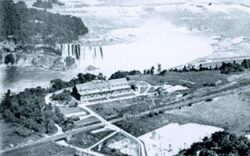 Niagara Falls is a city of about 85,000 people in Ontario. It is located on the Niagara River near the famous falls of the same name on the border with the American state of New York.

Miscellaneous Junior (use Niagara as name for team)

There was a Niagara District League which participated in a 1927-1928 season with teams in Niagara-on-the-Lake (league champion) and Port Dalhousie as well as teams named Maroons. Confederates, Athletics, Canadiens and Shieks (all based in unknown towns). Some information on this league in on the 1927-28 OHA Junior Season page.