The New York Raiders were a founding member of the World Hockey Association based in New York City. Intended to be the WHA's flagship franchise, its short tenure was a result of being unable to complete with the National Hockey League's established New York Rangers, and the expansion New York Islanders. After its inaugural season, the team was known as the New York Golden Blades and eventually relocated to Cherry Hill, New Jersey, becoming the New Jersey Knights.

The New York Raiders participated in the first WHA draft. Its coach was Camille Henry and the very first draft pick - second overall - was Al Sims. Sims did not, however, play for the Raiders, but he signed with the Boston Bruins instead.

The team was initially slated to play in the brand-new Nassau Veterans Memorial Coliseum on Long Island. However, Nassau County didn't consider the WHA a professional league and wanted nothing to do with the Raiders. Nassau County retained William Shea to get an NHL team to play in the new building. The NHL responded by hastily awarding a franchise to Long Island—the New York Islanders. The Islanders' lease with the Coliseum was structured in such a way to effectively lock out non-NHL teams.

The Raiders were forced to play in Madison Square Garden, where they faced being tenants to their major competitor, the New York Rangers. The situation rapidly became untenable, with an onerous lease and poor attendance. The three original owners defaulted, and the league ended up taking control of the team midway through the season.

Following the season, a new local owner bought the team and renamed it the New York Golden Blades. Among the Golden Blades' claims to fame was the only female coach in U.S. professional sports, their power skating coach. The Golden Blades were forced to revert to a Sundays-only home schedule, due to the high price of rent at Madison Square Garden, and scheduling conflicts with other events that took place in the arena.

This wasn't enough to save the team, and the league was forced to take over the franchise again 24 games into the season. Realizing that it could not hope to compete with both the Rangers and the Islanders, the WHA moved the Golden Blades to New Jersey soon after taking control.

The New Jersey Knights started play part way through the 1973–74 season, in Cherry Hill, New Jersey. Their home ice rink was Cherry Hill Arena. After 1974, the team moved to San Diego, California and became known as the San Diego Mariners.

The Knights home rink, the Cherry Hill Arena had a slope in the ice surface, which caused pucks to shoot upward from results of a pass, or shot. The arena was also closely cramped, with players not having adequate changing and dressing facilities. The Cherry Hill Arena was one of the last professional hockey arenas to have "chicken wire" fencing above the arena boards instead of plexiglass. Arena grounds are now the site of the Cherry Hill Shopping Center and Cherry Hill Inn 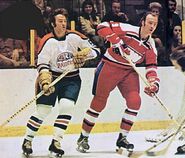