The New Haven Blades were a professional team in New Haven, Connecticut. They played in the Eastern Hockey League from 1954 to 1972.

The Blades played in the 4000 seat New Haven Arena.

In 1972 the team was renamed the New England Blades based in West Springfield, Massachusetts.

The team folded along with the league in 1973. In 1972 New Haven then got a team in the American Hockey League called the New Haven Nighthawks.

Blades who played in the NHLEdit 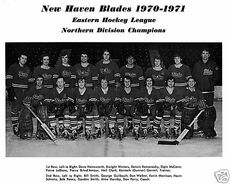 1970-71 New Haven Blades
Add a photo to this gallery
Retrieved from "https://icehockey.fandom.com/wiki/New_Haven_Blades?oldid=657835"
Community content is available under CC-BY-SA unless otherwise noted.