Ice Hockey Wiki
Register
Don't have an account?
Sign In
Advertisement
in: Born in 1914, Dead in 1987, Canadian ice hockey players,
and 8 more

Neil McNeil Colville (August 4, 1914 - December 26, 1987) was a professional player. Born in Edmonton, Alberta, he played for the New York Rangers in the National Hockey League with his brother Mac, winning the Stanley Cup in 1940.

Colville joined the Rangers' farm team in 1934 and quickly made his way to the pros by 1936, centreing the "Bread Line" with his brother and Alex Shibicky, where he played until World War II. During the war, he and his brother were stationed in Ottawa and played on the army's Ottawa Commandos team, winning the Allan Cup in 1942.

After the war, they both returned the Rangers, this time as defencemen, the first pairs of brothers to ever do so in the NHL. Neil was just as good at defence as he was on offense, becoming the first player to be named to All-Star Teams as both a forward and a defenceman.

He retired in 1949 and became the Rangers' youngest coach a year later, but he was forced to resign due to health problems halfway through his second season. He was inducted into the Hockey Hall of Fame in 1967. He died in 1987. 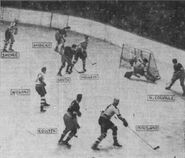 Brothers Colville, Patrick, Bentley and Carse before a game on December 1, 1940.