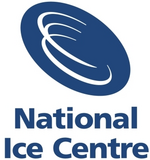 The National Ice Centre (NIC) is located in Nottingham, England. Just east of the city centre, it is close to the historic Lace Market area. As well as hosting ice skating and ice hockey, it also doubles as the Trent FM Arena Nottingham, where many popular bands play, and it serves as a conference centre.

The site has had an ice stadium on it since 1939, but the old building was showing its age: hence its nickname, "The Barn". Several buildings were demolished to make way for the new arena, including an Art Deco warehouse on the opposite side of Barker Gate, and bodies had to be exhumed from a nineteenth century graveyard found under the car park. This obviously led to some controversy at the time; but The Old Cricket Players pub was initially spared. It was eventually pulled down to make way for an apartment block called the "Ice House". The Ice Stadium closed in April 2000 and was demolished soon after to make way for the building of the second public rink.

The current building was first announced in September 1995 at an estimated cost of £13 million - part of which was to come from National Lottery funds. The plans were unveiled in October 1996, by which time the British Olympic Association had got behind the proposal. The first public skating session took place in April 2000. The final cost of the project was around £40m, 10% of which came from the lottery - one of the highest grants awarded.

The stadium is home to the Nottingham Panthers ice hockey team, founded in 1946 (although disbanded in 1960 and reformed 20 years later).

Trent FM Arena Nottingham was formerly called Nottingham Arena and was renamed on first April 2008, as part of a four year naming rights for the local radio station. The Arena will still be managed by the Nottingham Ice Centre Ltd.

Retrieved from "https://icehockey.fandom.com/wiki/National_Ice_Centre?oldid=102630"
Community content is available under CC-BY-SA unless otherwise noted.