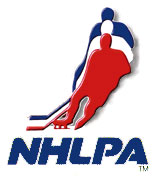 The association formed in June 1967, when representatives of the six NHL teams met and elected Bob Pulford their first president and appointed Alan Eagleson as its executive director.

An earlier NHLPA had been formed in 1957 by hockey players Ted Lindsay of the Detroit Red Wings and Doug Harvey of the Montreal Canadiens after the league had refused to release financial information. The owners broke the union by trading players involved with the organization or sending them to the minor leagues.

To prevent the new NHLPA from suffering the fate of its predecessor, Pulford met with the owners of the NHL teams and demanded they recognize the new union or the union would seek official recognition from Canadian Labour Relations Board. Additionally, the players sought guarantees that no member of the new union would be punished for being a member.

In 1992, Eagleson resigned and was replaced by Robert W. Goodenow. Subsequently, Eagleson was indicted for fraud, racketeering, and embezzlement, ultimately serving six months in prison.

Following a lockout which shortened the 1994-95 NHL season by 36 games, the NHLPA in 1995 signed a collective bargaining agreement. This agreement was originally to last for six seasons with re-negotiation possible in 1998, but was eventually extended to last until September 15, 2004.

Another lockout cancelled the 2004-05 NHL season. It was resolved on July 14 2005, when the NHLPA finally gave in to a salary cap.

On March 11 2007, a conference call conducted by the 30 player representatives of the NHL teams and Ted Saskin led to a vote that placed executive director Ted Saskin and NHLPA senior director Ken Kim on a paid leave of absence.

On May 11, 2007 a conference call with the 30 player representatives ended in a unianimous vote terminating Ted Saskin as executive director.

On October 24th, 2007, after a 4 month search, the NHLPA voted Paul Kelly as the new Executive Director of the NHLPA via a secret ballot vote. Kelly is a former federal prosecutor and helped bring down former NHLPA head Alan Eagleson.