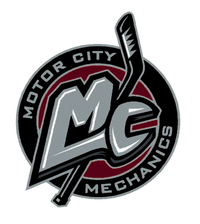 The Motor City Mechanics were a professional ice hockey team of the United Hockey League. The Mechanics played their first two seasons, from 2004-2006, at Great Lakes Sports City Superior Arena in Fraser, Michigan. After being swept in the first round of the UHL playoffs, the Mechanics announced that they would suspend operations for the 2006-07 UHL season.

After looking to relocate, the franchise was sold to a new owner who planned to keep the team in the Detroit area, with home games at the Michigan State Fairgrounds Coliseum, starting in 2008; however, there has been no word on the team's fate.

First season and the NHL lockoutEdit

The team got a major boost during their first year when a lockout wiped out the 2004-05 NHL season, thus leaving the Mechanics the only professional hockey team in the Detroit market. The Mechanics signed three Detroit Red Wings players: Chris Chelios, Derian Hatcher, and Kris Draper. All three players had local ties; Hatcher had even played at the Mechanics' arena as a youth. However, due to visa problems, Kris Draper (a Canadian) never played a game for the Mechanics. Later, Motor City also signed Bryan Smolinski and Sean Avery, suiting up four active NHL players, more than any other North American pro team during the lockout. Despite the signings, however, the Mechanics barely played .500 hockey and missed the playoffs. Dennis Menard (a well known Zamboni driver in the local Detroit area) was the Zamboni driver for the Mechanics during their time spent at Great Lakes Sports City Ice Arena. <p>

<p> Echoing the famous Red Wings' Production Line of a half-century earlier, the Mechanics sponsored a contest to name its top scoring line of Adam Edinger, Peter Szabo and Brent Gretzky. On March 3, 2006, “The Assembly Line” was announced as the winner on the Mechanics' web site, beating out three other finalists: “Pit Crew,” “Engine Line” and “Motor City Drive Train.” The winning name was submitted by David Bolam.

Retrieved from "https://icehockey.fandom.com/wiki/Motor_City_Mechanics?oldid=272693"
Community content is available under CC-BY-SA unless otherwise noted.