This article is about the senior team. For the article about the junior team of the same name, please see Montreal Junior Royals.

The Montreal Royals were formed in 1932-33 when the hockey club of the Montreal AAA was split off.

During the late 1930's they outdrew the NHL's Montreal Canadiens and were partially responsible for almost driving them out of town. Later they would become a Canadiens farm team.

In the 1950's there was talk of admitting the Royals to the National Hockey League.

By this time the Canadiens were a powerhouse themselves and drawing very, very well. There was no room in Montreal for a minor pro team. The Royals folded in 1961. 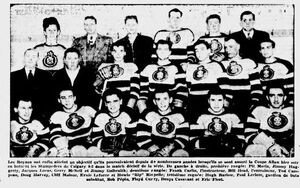 Montreal Royals who played in the NHL