The Montreal Olympics were a junior and a senior team in Montreal, Quebec

The senior team won the 1961-62 Quebec Senior Playoffs and the 1961-62 Eastern Canada Allan Cup Playoffs. They then lost the 1961-62 Allan Cup Final to the Trail Smoke Eaters. They folded in mid-season in 1962-63 due to financial reasons.

They were named the Olympics because they hoped to represent Canada in the 1964 Olympics.

The junior team played in the Mount Royal Junior League in 1930-31.

1961-62 Montreal Olympics who played in the NHL Edit 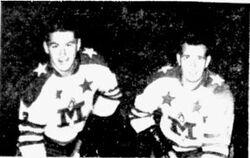 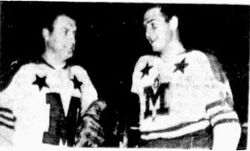 Coach Maurice Filion & Paul Depatie
Add a photo to this gallery
Retrieved from "https://icehockey.fandom.com/wiki/Montreal_Olympics?oldid=608900"
Community content is available under CC-BY-SA unless otherwise noted.