The Montreal Maroons were a professional men's ice hockey team in the National Hockey League (NHL). They played in the NHL from 1924 to 1938, winning the Stanley Cup in 1926 and 1935. They were the last non-Original Six team to win the Stanley Cup until the Philadelphia Flyers in 1974 and the last NHL franchise to fold, that had previously won a Stanley Cup championship.

The Maroons joined the league in 1924 along with the Boston Bruins, the first American team. The expansion fees for both teams were $15,000, with $11,000 of the Maroons fee going to their cross town rivals, the Canadiens. At that time, the Maroons were one of two Montreal teams in the league. While the Montreal Canadiens drew primarily francophone fans, the Maroons largely drew fans from the anglophone neighbourhoods of Montreal. The team was designed to appeal to the anglophone fans of the defunct Montreal Wanderers who folded just six games into the NHL's inaugural season.

Financial strains from the Great Depression led the NHL to realize that Montreal, despite its size, could not support two NHL teams. While both the Canadiens and Maroons had trouble drawing fans, there were far more francophone supporters for the Canadiens than there were anglophone supporters for the Maroons. As a result, the Maroons finished with the worst attendance in the league for three seasons in a row. This, along with the fact that both teams were owned by the Canadian Arena Company by 1935 (Ernest Savard and Maurice Forget, who owned the Canadiens, were part of the Canadian Arena Company and so were the owners of the Maroons, James Strachan and Donat Raymond.) made it obvious only one team could represent Montreal. The financial strains of the Maroons caused them to sell off star winger Hooley Smith and others.

Despite the Maroons' financial troubles, they continued to play competitive hockey well into the 1930s. In fact, the Maroons team that won the Stanley Cup in 1935 were the last team to do so without a loss in the playoffs for 17 years. However, the team's bleak financial situation finally caught up with them in 1937–38, as they finished 12–30–6, the club's worst season since winning only nine games in 1924–25. The league allowed the Maroons to suspend operations for the 1938-39 season. The Maroons' owners tried to sell to interests in St. Louis, Missouri. Earlier in the decade, St. Louis proved that it could support NHL hockey when the Ottawa Senators moved there to become the Eagles. However, while the Eagles had drawn very well, they only survived one season due to the high costs of travelling to Boston, Montreal and Toronto. The league was not about to give St. Louis another chance given the economic situation of the time. The Maroons were eventually sold to interests in Philadelphia, who had every intention of reviving the team after World War II. However, in 1946, the NHL reneged on long-standing promises to reinstate the Maroons and New York Americans.

Len Peto, a director with the Montreal Canadiens, took control of the dormant Maroons and succeeded in getting the franchise transferred to Philadelphia, but lack of a suitable arena was the problem and the league gave Peto until the end of the 1946–47 season to rectify this. By that time, the franchise could not build a suitable arena, and this was the end of the dormant franchise.

The last active Maroons player was Herb Cain, who remained in the NHL until 1946.

The game was meaningless for the Maroons. They were finishing last in their division and out of the playoffs.

The Canadiens scored the only goal of the first period and then jumped into a 4-1 lead by the end of the second. In the third period the Canadiens added two more goals.

With the game out of the Maroons' reach, Jimmy Ward scored at the 10:40 mark of the third period and then added one more with eleven seconds left in the game and in the Maroons' career.

The final score was 6-3 for the Canadiens. Only about 5000 people attended. 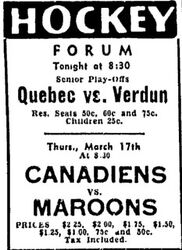 Summary for the last game.
Add a photo to this gallery

Retrieved from "https://icehockey.fandom.com/wiki/Montreal_Maroons?oldid=675121"
Community content is available under CC-BY-SA unless otherwise noted.