Ice Hockey Wiki
Register
Don't have an account?
Sign In
Advertisement
in: Canadian ice hockey teams, Established in 1932, Disestablished in 1954,
and 3 more

The Montreal Junior Royals were a junior team in Montreal. Like their senior cousins Montreal Royals, were founded in 1932 when the Montreal AAA's hockey team was split off.

They played in the Junior Amateur Hockey Association and its successor, the Quebec Junior Hockey League.

The Junior Royals were a very strong team from the beginning, They won the Quebec junior title in 1932-33 and made it to the 1932-33 Eastern Canada Memorial Cup Playoffs.

In 1941 they became the first Quebec team to appear in the Memorial Cup Final which they lost.

In 1949 they became the first Quebec team to win the Memorial Cup.

The Junior Royals were moved to Granby in 1951-52 but the team was not successful there. It moved back to Montreal in 1952 for two more seasons.

The team folded after the 1953-54 season - just one year before the league itself folded. 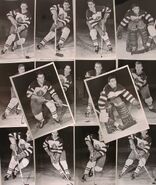 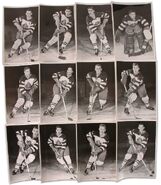