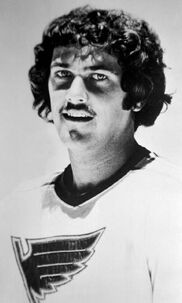 played junior with the Kenora Muskies and the North Bay Trappers. ... scored four goals in a 1974 NOJHA playoff game. ... joined the Denver Spurs of the Central Hockey League for the 1974-75 season. ... the following year, played eight games with the NHL St. Louis Blues. ... the rest of his year was spent with the Providence Reds of the American Hockey League. ... in 1976-77, back in the CHL with the Kansas City Blues, winning the league championship. ... and after 17 games in 1977-78, left for Austria. ... played one year in Europe, then retired, moved to Ottawa area and became a civil servant. ... played on Ottawa Senators Alumni charity team.

Retrieved from "https://icehockey.fandom.com/wiki/Mitch_Babin?oldid=428338"
Community content is available under CC-BY-SA unless otherwise noted.