The Mississauga St. Michael's Majors are a junior ice hockey team in the Ontario Hockey League, based in Mississauga, Ontario, Canada. The team was originally known as the Toronto St. Michael's Majors, whose hockey program was founded and operated by St. Michaels College in 1906. The current franchise was revived in 1996, and was relocated to Mississauga in 2007 after spending 10 years in Toronto.

St. Michael's revived its hockey program for the 1997–98 season in the Ontario Hockey League. The recent version of the Majors played for 10 seasons, until being relocated as the Mississauga St. Michael's Majors. Member of Parliament Dennis Mills was appointed as the first president and governor of the St. Michael’s Majors in 1996. [1]

Originally owned by St. Michael's College School, the team is now owned by Eugene Melnyk, who is the current owner of the Ottawa Senators and CEO of Biovail Corporation. Melnyk pursued several deals to get a new arena for his team, but none came to fruition. One of Melnyk's foiled plans included purchasing Maple Leaf Gardens.

On July 12, 2006, Eugene Melnyk bought the Mississauga IceDogs. After the 2006–07 season, Melnyk sold the IceDogs to Bill Burke, and moved the Majors to the Hershey Centre in Mississauga. The IceDogs, in turn, moved to Jack Gatecliff Arena in St. Catharines, Ontario and are now known as the Niagara IceDogs. The team has struggled at the box office in its inaugural season in Mississauga. The team currently averages 1,953 fans in the 5,400 seat Hershey Centre, placing it 59th out of 60 CHL teams in terms of attendance.

Dave Cameron returned to the Majors organization after a stint in the AHL. Cameron previously coached with the club in Toronto from 2000 to 2004.

The St. Michael's Majors have not retired any numbers, but have honoured these people with banners in the rafters.

The primary logo for the Majors displays "St. Michael's" written in script, with a Majors underscore written in light blue. The Majors colours are light blue, navy blue & white. The Majors hockey uniforms feature a different logo, a large letter "M" on the front, with the school crest (inset right) on the upper left chest, and the St. Michael's cloverleaf patch on the shoulders.

To celebrate the Majors 10th season back in the league, the team launched a new 3rd jersey with the shoulder cloverleaf logo on the front. The jersey is also baby blue in colour. After the move, the Majors' logo was changed slightly to a more modernized look, and new jerseys were unveiled. 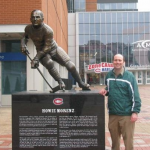