The arena held 5,500 people and was located at 2900 Dupont Ave S. The University of Minnesota's Golden Gophers team used the arena as their primary home rinks from the 1925 until 1950. 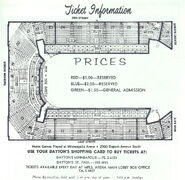 Minneapolis Arena seating chart
Add a photo to this gallery

Retrieved from "https://icehockey.fandom.com/wiki/Minneapolis_Arena?oldid=643461"
Community content is available under CC-BY-SA unless otherwise noted.