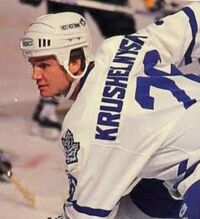 Mike Krushelnyski (born April 27, 1960, in Montreal, Quebec) was a Canadian professional ice hockey centre in the NHL, and current head coach of Vityaz Chekhov in the KHL.

Krushelnyski was selected by the Boston Bruins in the 6th round, 120th overall, in the 1979 NHL Entry Draft. He and Marty McSorley were part of the trade when Wayne Gretzky was sent to the Los Angeles Kings for two players, draft picks and cash. He won 3 Stanley Cups with the Edmonton Oilers in 1985, 1987, and 1988. Following 897 games Krushelnyski recorded 241 goals and 328 assists for 569 career points.

On November 26, 2007, he was named head coach of the Ingolstadt Panthers in Germany.

For the 2008-09 KHL season, he was made head coach of Vityaz Chekhov of the KHL. Awards & Achievements