Ice Hockey Wiki
Register
Don't have an account?
Sign In
Advertisement
in: Born in 1911, Dead in 1992, American ice hockey players,
and 10 more

Mike Karakas (December 12, 1911 – May 2, 1992) was an American professional goaltender in the National Hockey League (NHL) who was the league's first American-born and trained goaltender. Karakas played six full seasons and parts of two others with Chicago Black Hawks. He appeared in two Stanley Cup Finals, winning once. In 1938, Karakas led Chicago, who had .411 winning percentage in the regular season, to a second Stanley Cup, playing with a steel-toed boot in the last two games of the Finals after he had broken it in the first game of the Finals. Karakas is one of the original members of the United States Hockey Hall of Fame.

Born in Aurora, Minnesota, he grew up in nearby Eveleth. Growing up, Karakas and Frank Brimsek, who also became a goaltender in the NHL, were battery mates for their high school baseball team, with Karakas catching.

Karakas won the Stanley Cup in the 1937–38 season, playing for the first out of two teams which won the Cup with a losing record. For the 1937-38 Chicago Black Hawks season, their owner, Major Frederic McLaughlin, order his general manager to "ice [him] a team of all American players." After losing five of its six first games with an all-American roster, some Canadian players were added; however, the team finished the season with an 14–25–9 record for a .411 winning percentage.

In the playoffs, Karakas suffered a broken toe just before the start of the Stanley Cup final against the Toronto Maple Leafs. The Black Hawks were forced to substitute Alfie Moore for Karakas in the first game. After the first game, Moore was ruled ineligible, and the Black Hawks lost the next game. Karakas returned with a steel-toed boot and won the next two games, leading the Black Hawks to their second Stanley Cup win. Overall in that playoff run, Karakas had a 6–2 record, with two shutouts and a 1.71 goals-against-average.

After helping Chicago win the Stanley Cup in 1938, Karakas asked the team's owners for a $500 raise. The owners refused the raise, and for the next five seasons Karakas played three full seasons in the American Hockey League (AHL), and split two between the AHL and the NHL.

Karakas had 28 shutouts in the regular season, and another three in the playoffs in his six seasons in the NHL. In each of the six full seasons in which Karakas appeared, he played all 48 games. In 1973, Karakas was named as an original member of the United States Hockey Hall of Fame, located in his hometown of Eveleth. 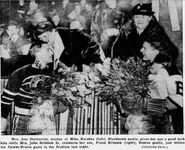 Mike Karakas and Frank Brimsek with their mothers, February 5, 1939.