Unfortunately, the Stags were even more of a disaster than the Detroit Red Wings. The team was composed of journeymen at best, with the exceptions of star left winger Marc Tardif, veteran Western Hockey League star Gary Veneruzzo and beleaguered ex-NHL goaltender Gerry Desjardins (who found his way back to the NHL in mid-season and helped lead the Buffalo Sabres to the Stanley Cup finals). The only notable Stags draft pick to actually sign with Michigan was Ed Johnstone, a future 30-goal scorer with the New York Rangers (he would score four times in 23 games for the Stags, including the first regular-season goal in club history). The club also had problems drawing crowds. Despite playing over .500 (12-8-2) at Cobo Arena, attendance was not nearly enough to break even. Only 2,522 were at their first home game (it didn't help that Michigan had to play their first five games on the road, as the circus was in town), and subsequent gates weren't much better. The club would average an anemic 2,959 for its 22 home games. Additionally, the Stags were unable to secure a television deal (except for a one-off broadcast), rendering them practically invisible. Bleeding money, Michigan was eventually forced to trade Tardif to Quebec for Pierre Guite, Michel Rouleau and famed league sniper Alain Caron.

The only shutout in Stags history occurred on December 19, 1974 in a 1-0 victory over the Cleveland Crusaders. In a game marred by multiple brawls, Stags goalie Paul Hoganson out-dueled All-Star goalie Gerry Cheevers and made 32 saves.

The Stags hoped they could at least draw fans for the highly anticipated return of Gordie Howe to Detroit, but Howe's Houston Aeros weren't scheduled to play at Cobo until February 2. The Aeros did come to town to play two exhibition games: the first, across the river in Windsor on October 8; the other, two days later at Cobo Arena. (Howe and his sons missed the first game, as they were in Czechoslovakia with Team Canada; Gordie scored twice in the second contest, before a crowd of 5,536.) As it turned out, Howe and company would never meet Michigan in regular-season contest in Detroit, as the Stags had folded before then.

The last win in Stags history was on January 9, 1975, a 5-4 overtime victory against the Winnipeg Jets. Steve West scored the game winner. The Stags played their last game, a 2-1 loss, on January 18, 1975 against the Cleveland Crusaders.

The Baltimore Blades were created a week after the demise of the Stags and were operated by the league. The Blades played out of the Baltimore Civic Center, but attendance did not improve, and was not helped by the team finishing out the season with a 3-13-1 record. At season's end, the league contemplated moving the franchise to Seattle, but the move never materialized and the Blades folded outright. Players from the Michigan/Baltimore team, along with those of the defunct Chicago Cougars, were put into a dispersal draft to be claimed by other WHA teams.

The team's final record was 21-53-4, the second worst in the league that season and far out of a playoff spot. Veneruzzo was the leading scorer for the team with a 33-27-60 mark, nearly twice as much as anyone else save for Jean-Paul LeBlanc.

Michigan played just one game on local television: the season opener against the Indianapolis Racers, broadcast live from Indianapolis on WXON Channel 20. Detroit radio icon Vince Doyle called play-by-play and former Red Wing Marty Pavlich was the color commentator. The Stags won the game, 4-2, but few saw it; the Stags were up against game five of the 1974 World Series. Eight other games were scheduled to be televised but money became a problem by mid-November, especially after Michigan lost 11 of their next 12 following their season-opening win. 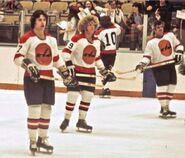