"Redbirds" is the nickname of the male sports teams of McGill University, which is located in Montreal, Quebec. From 1926 to 2019, "Redmen" was their nickname. (Its female teams are called the “Martlets”.) McGill is a member of the Reseau du sport etudiant du Quebec (RSEQ) and U Sports (formerly known as CIS). The RSEQ does not operate a men's hockey league, so McGill is one of three RSEQ based teams that play in the Ontario University Athletics (OUA) hockey league.

The team was originally organized in 1877 and is the oldest organized hockey team in the world, In fact McGill students were involved in writing the first official rules for the game, which were first published in 1877.

The McGill men's hockey team competed in the Canadian Intercollegiate Athletic Union (CIAU Central) from its inception in 1902-03 and its successor conference, the Ontario-Quebec Athletic Association (OQAA), from 1955-56 until the conference folded after the 1970-71 season. In 1971-72 McGill joined the Quebec Universities Athletic Association (QUAA) once the Ontario and Quebec conferences were re-organized along provincial lines. The QUAA folded after the 1986-87 season and in 1987-88 the three remaining QUAA teams joined the OUAA, which changed names to OUA in 1997-98.

McGill also entered a team in the Junior Amateur Hockey Association which was the local junior league in Montreal.

During World War I there was no intercollegiate hockey league in Canada. In part to replace it, McGill entered a team in the Montreal City Hockey League. It played in this league from 1914-15 through 1920-21, and again in 1923-24. Later on McGill joined the Quebec Senior Hockey League, also known as the Montreal Senior Group in 1926-27 and continued in this league until 1938-39.

The International Intercollegiate League, which involved three Canadian teams and three American institutions, was organized in 1936 with both Canadian and American universities and continued until 1940.

The varsity team played in more than one league or competition in several of these seasons. The intermediate and junior teams are in the segments below.

Note: This was an intermediate league played in substitution for the usual leagues during the war years.

Note: This was McGill's 2nd team playing 1st teams from other schools.

Note: This was the end of 2nd teams and the intermediate era.

These competitions were age-restricted junior competitions. JAHA information is limited from 1900 to 1909.

Redmen who played in the NHL[] 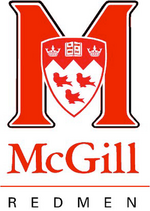