Martlets goaltender Kim St. Pierre also played a game for the McGill Redmen. She was the first woman in Canadian Interuniversity Sports history to win a men’s regular season game when McGill University defeated Ryerson University on November 15, 2003 by a score of 5-2. [1]

During the 2011-12 season, Ann-Sophie Bettez was an alternate captain with the Martlets. Her 37 points and 24 assists ranked second in the RSEQ. Her four game winning goals (in 20 games played) would tie for first in the RSEQ. In March 2012, Bettez was only the second Martlet to claim the Brodrick Trophy (awarded to the CIS Player of the Year). Goaltender Kim St-Pierre was the first Martlet to win it following the 2002-03 season. Bettez became the second player in CIS women’s hockey history to claim the rookie-of-the-year and MVP awards in a career. [2] The first double-winner was former Alberta Pandas player Danielle Bourgeois.

Following Howie Draper, Martlets head coach Peter Smith was the second CIS coach to win the Coach of the Year award three times. He claimed it the first time in 2002-03 (shared with Lisa MacDonald of Saint Mary’s), and won again in 2007-08. His third victory came in 2011-12 as he helped McGill to a first place finish for the seventh consecutive season. At the RSEQ Conference level, he was won RSEQ Coach of the Year seven times between 2000 and 2012. The 2011-12 season saw McGill earn an 18-1-1 record , as the Martlets registered the second-best offence in the country (4.80 goals per game), the top defense (1.00 GAA), best power-play (25.0%), and the least penalized team in CIS, averaging 7.6 minutes per game. [3] He also served seven years with the national women’s program and was an assistant coach with the team that won the Gold Medal at the 2010 Vancouver Winter Games. From 2000 to 2012, Smith led the Martlets to a berth at the CIS national eleven times. He has claimed three CIS gold medals, two silver medals and four bronze medals, respectively. Heading into the 2012 CIS tournament, Smith boasted a career record of 327-118-30 in 475 games overall (.720).

In 2010, the Martlets were not able to win their third Canadian Interuniversity Sport women's ice hockey championship. The Martlets head coach was Amey Doyle. The Alberta Pandas defeated the Martlets 2-0 in the CIS National Championship. [4]

On October 1, 2011, the Martlets defeated the Vermont Catamounts women's ice hockey program by a 3-2 tally. With the win, head coach Peter Smith celebrated the 300th win of his career. [5] 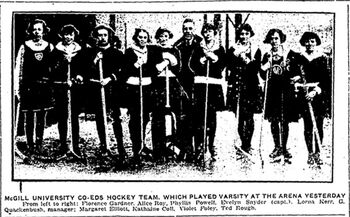 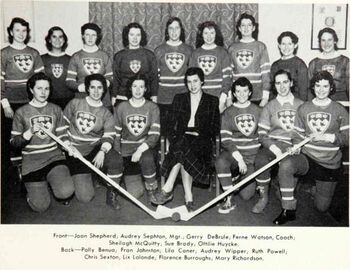 Retrieved from "https://icehockey.fandom.com/wiki/McGill_Martlets?oldid=733300"
Community content is available under CC-BY-SA unless otherwise noted.