Ice Hockey Wiki
Register
Don't have an account?
Sign In
Advertisement
in: Montreal Canadiens (senior) players, Born in 1921, Dead in 2000,
and 15 more

Joseph Henri Maurice "Rocket" Richard, Queen's Privy Council for Canada, Order of Canada, National Order of Quebec (August 4, 1921 – May 27, 2000) was a professional player who played for the Montreal Canadiens from 1942 to 1960. The "Rocket" was the most prolific goal-scorer of his era, the first to achieve the feat of 50 goals in 50 games. He lived most of his life in Ahuntsic, Montreal.

Richard was the first to score 50 goals in one season (the 1944–45 NHL season), doing so in 50 games, and the first to score 500 goals in a career. He finished his career with 544 goals in the regular season, with 82 in the NHL playoffs which included a record six overtime winners (surpassed only by Joe Sakic who has eight), and led the league in goals five times. He also amassed 421 assists for a total of 965 points in 978 games.

Richard won the Stanley Cup 8 times in Montreal, was captain of 5 straight cup wins from 1956–1960, won the Hart Trophy in 1947, and was elected eight times to the first all-star team and six times to the second all-star team, and played in every National Hockey League All-Star Game from 1947 to 1959. Teamed with Elmer Lach as centre and Hector 'Toe' Blake playing left wing, they formed the Punch Line.

He was inducted into the Hockey Hall of Fame in 1961, the customary three-year waiting period being waived in his honour.

Richard originally played wearing the jersey number "15" but changed it to "9" in honour of his first child, Huguette, who weighed nine pounds at birth. His number has been retired by the Montreal Canadiens.

In the 1950s, Richard was frequently compared to emerging star Gordie Howe of the Detroit Red Wings. Both were right wingers who wore the same sweater number (9), were frequently contenders for the league scoring title, and could also play rough if needed. During their first encounter in the Montreal Forum, when Howe was a rookie, he knocked Richard down with a punch after being shoved. The Red Wings and Canadiens faced off in four Stanley Cup finals during the 1950s. When Richard retired in 1960, he paid tribute to Howe, saying "Gordie could do everything."

Richard's career began and ended before the beginning of huge salaries. The largest yearly salary he ever made was $25,000 (equivalent to $200,000 in 2008). His jersey # 9 was retired on October 6, 1960 by the Canadiens, less than a month after he announced his retirement. His brother Henri Richard joined him with the Canadiens in 1955 and would go on to win 11 Stanley Cups with the team, an NHL record.

On March 23, 1944, Richard scored all five goals for the Canadiens in a 5–1 victory over the Toronto Maple Leafs in the playoffs en route to a Stanley Cup victory and was awarded all three stars for his efforts.

On March 10, 1955, Richard was given a match penalty for engaging in a fight with Hal Laycoe in a game against the Boston Bruins. He flattened linesman Cliff Thompson in the resulting melee, and as that was his second attack on an official that season alone, a hearing was held: Richard was suspended for the balance of that season and the playoffs, which was at the time, the longest suspension for an on-ice incident in NHL history. Public outrage from Montreal soon poured in, but NHL President Clarence Campbell did not budge, and announced that he would be attending the Canadiens' next home game against the Detroit Red Wings in four days.

Midway into the first period, Campbell arrived with his fiancee. Outraged Canadiens fans immediately began pelting them with eggs, vegetables, and various debris, with more being thrown at him each time the Red Wings scored as they built up a 4-1 lead. The continuous pelting of various objects stopped when a tear gas bomb was set off inside the Forum not far from where Campbell was sitting. The Forum was ordered to evacuate and Campbell ruled the game forfeited to the Red Wings. A riot ensued outside the Forum, causing $500,000 in damage to the neighbourhood and the Forum itself. Hundreds of stores were looted and vandalized within a 15-block radius of the Forum. Twelve police and 25 civilians were injured, and scores of people were arrested. The riot was over at 3 a.m., and left Montreal's Ste-Catherine Street a mess.

When Richard's teammate Bernie Geoffrion passed him in points on the last day of the regular season, he was booed by the Montreal faithful. The Canadiens would lose the Cup final to the Red Wings in seven games, but would win the Cup in each of the next five seasons, defeating the Red Wings in 1956. Richard retired in 1960 after the Canadiens' fifth straight Stanley Cup, a record that stands as of 2009..

In 1967 Richard was inducted into the grade of Officer in the Order of Canada, making him one of the first members of the order. He was later promoted to Companion of the order in 1998, the same year he was ranked number five on The Hockey News list of the 100 Greatest Hockey Players, the highest-ranking Montreal Canadien. Richard was also given the rare distinction of being appointed to the Queen's Privy Council for Canada in 1992, entitling him to the style The Honourable (French: L'Honorable) for life. The appointment, and those of twenty others that year made by the Governor General of Canada on the advice of Prime Minister of Canada Brian Mulroney, remains unusual as, traditionally, being made a privy councillor is an act reserved for members of Cabinet of Canada, Chief Justices of Canada, and certain others who require access to classified documents. In August 2008, Canadian Pacific Railway named a station in his honour.

Although Richard had a falling-out with the Canadiens not long after he retired in 1960, he eventually patched things up and returned to them, serving the club as an unofficial goodwill ambassador from 1991 — highlighted by the Habs' most recent (to date) Cup in 1993 until he died. The Maurice "Rocket" Richard Trophy was donated by the Montreal Canadiens hockey club to the NHL in 1999, to be awarded annually to the goal-scoring leader during the regular season. Richard himself had led the league in goals five times.

In 1996 at the closing of the Montreal Forum, a tearful "Rocket" received the longest standing ovation in the city's history: Over 16 minutes of adulation poured over him, chanting his nickname over and over again. Richard, always the reluctant hero, looked around in surprise for the first few minutes. When he realized the crowd was not letting up and their love for him was real, he broke down in tears whilst waving and mouthing "thank you". He rarely showed this side of himself, as he always tried to remain humble. The last few minutes of adulation saw Richard closing his eyes, while the crowd chanted "GO HABS GO!" over and over again. Richard later stated that when he closed his eyes and heard the crowd, it brought him back to his younger days. He thought it was a very loving gesture by the fans. A Quebec Major Junior Hockey League team was also named after him, the Rocket de Montréal, playing out of the Maurice Richard Arena (in 2003 this team moved to Prince Edward Island becoming the P.E.I. Rocket). Their team logo prominently features Richard's number 9. On June 27, 2001, the Government of Canada unveiled a monument in Jacques-Cartier Park, in Hull, Quebec, honouring Richard, and he was inducted into Canada's Walk of Fame.

Despite being long retired by the time of his death in 2000, an estimated 115,000 people of all ages paid their respects while his body lay in state at Montreal's Bell Centre. Following Richard's death, the Montreal Expos Major League baseball team wore Richard's number 9, in black, on their right sleeves for the duration of the 2000 season, and flags were lowered to half mast as Quebec's National Assembly was suspended for the day. Richard was given a provincial state funeral that was broadcast live across Canada, Among those who attended were Governor General Adrienne Clarkson, Lieutenant Governor of Quebec Lise Thibault, various politicians (including then Prime Minister of Canada, Jean Chrétien, and then Premier of Quebec Lucien Bouchard), Gordie Howe, Jean Béliveau, and Montreal Canadiens team captain Saku Koivu. 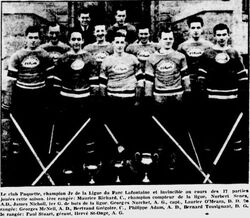 The 1939-40 Paquette team, that won Montreal's Lafontaine Park Junior League with 17 games without a loss. Richard (left) was the league's leading scorer. 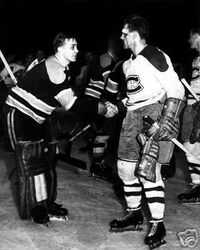