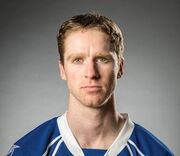 As a member of the Winnipeg Thrashers AAA midget hockey team, Bodie was named the Most Valuable player and top defenceman at the 2008 Canada National Championship. The Thrashers captured the silver medal.

Bodie played collegiate hockey for the Union Dutchmen in the NCAA Division I ECAC conference. In his sophomore year, Bodie's outstanding play was recognized when he was selected to the ECAC Hockey First Team.

Undrafted, Bodie was signed by the New York Rangers to a one-year entry-level contract on April 15, 2014, after Union won the NCAA Championship.

Retrieved from "https://icehockey.fandom.com/wiki/Mathew_Bodie?oldid=593736"
Community content is available under CC-BY-SA unless otherwise noted.