Mary Brown's Centre (formerly Mile One Centre) is an indoor arena and entertainment venue located in downtown St. John's, Newfoundland and Labrador, Canada. The arena opened in May 2001, replacing Memorial Stadium. At full capacity the arena can seat 7,000 people.[1]

Though the centre's name is often assumed to be a generic name based solely on the building's location, Mile One Centre is in fact among the many North American sports venues that have raised funds by selling their naming rights. In the case of Mile One, brewing company Molson initially acquired the naming rights for 10 years (2001–2011), as well as other privileges such as being the venue's exclusive beer supplier, for $1.5 million.[2] Molson then resold the naming rights to Danny Williams, then-owner of Cable Atlantic (and later premier of Newfoundland and Labrador), for $600,000. Before the centre opened, however, Williams sold Cable Atlantic to Rogers Communications in order to pursue politics, but retained the naming rights personally. Ultimately Williams chose to name the centre based on the venue's geography.[3]

"Mile One" is a trademark owned by the Williams family's charitable foundation, not the city, meaning that the centre can only use the "Mile One" name so long as it has the family's permission to do so. This implies that if and when Williams's rights expire and are not renewed, the centre might be forced to find a new name, regardless of whether or not a new sponsor is found.[4]

On October 14, 2021, it was announced that the naming rights to the arena have been bought by the Newfoundland-based fried chicken franchise Mary Brown's. The new name will be Mary Brown's Centre and change will take effect November 5, 2021.[5]

The building was originally home to the St. John's Maple Leafs of the American Hockey League. The Leafs played out of the centre from 2001–2005 before relocating to Toronto, Ontario to become the Toronto Marlies. Maple Leaf Sports & Entertainment (MLSE) stated that the relocation was necessary to better monitor prospects for the co-owned Toronto Maple Leafs.[6]

The Dobbin family were granted an expansion Quebec Major Junior Hockey League (QMJHL) franchise in 2004 to be later named the St. John's Fog Devils.[7] The Fog Devils began playing at Mile One Centre in 2005. However, the Fog Devils would relocate to Montreal, Quebec, after three seasons in St. John's to become the Montreal Junior Hockey Club. Many reasons were attributed to the Fog Devils' demise including lack of fan support, a poor lease agreement and high travel costs. The Fog Devils' departure left Mile One Centre without a major tenant for the first time since the building opened.[8]

Professional hockey returned to St. John's in 2011 when Winnipeg-based True North Sports and Entertainment announced a lease agreement with former Newfoundland and Labrador premier Danny Williams that saw their AHL franchise (formerly known as the Manitoba Moose) relocated to the Mile One Centre. The St. John's IceCaps played their inaugural season in 2011–12 and as the minor league affiliate of True North's National Hockey League team, the Winnipeg Jets. In honour of this development, the Kraft Hockeyville pre-season game between the Jets and the Ottawa Senators (which was originally to be held in Conception Bay when announced as it was prior to the relocation of the Atlanta Thrashers to become the Jets, causing the Moose to become the IceCaps) was moved to the Mile One Centre.[9] In March 2015, it was announced that the Jets would move their AHL team from St. John's back to Winnipeg as the Moose in 2015–16. The IceCaps' organization was then able to get the Montreal Canadiens' AHL team, the Hamilton Bulldogs, to relocate to St. John's for the start of the 2015–16 season, retaining the IceCaps name.[10] However, this was only a temporary move while the Canadiens built a rink for their AHL team in Laval, Quebec. In 2017, the Canadiens-owned franchise left and became the Laval Rocket.

In 2018, after a year without a hockey tenant at Mile One, St. John's was granted an ECHL expansion team with the Newfoundland Growlers.[11]

After long negotiations, the arena became the home to the St. John's Edge of the National Basketball League of Canada beginning with the 2017–18 season bringing professional basketball to St. John's.[12] On July 15, 2021, the St. John's Edge left Mile One when the arena did not renew the lease with the team, opting to grant a lease to a different ownership group with an American Basketball Association franchise.[13][14] 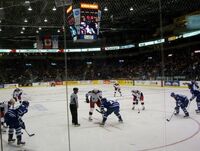 On September 22, 2014, Mile One Centre held two split squad preseason games for the Ottawa Senators vs. the New York Islanders. New York won both games 3–2, the latter game on a shootout. The Senators faced the Carolina Hurricanes at Mile One for another preseason game on September 27, 2015.

A National Basketball Association exhibition game between the Toronto Raptors and the Cleveland Cavaliers in 2003, was cancelled on game night due to an excess of condensation built up on the playing surface due to the inside temperature. LeBron James was on hand as it was a scheduled preseason game of his rookie season.

Other hosted sporting events include: