Mark Daniel Stuart (born April 27, 1984) is an American professional ice hockey player who currently plays defense for and is an alternate captain of the Winnipeg Jets of the National Hockey League (NHL). He was drafted by the Boston Bruins 21st overall in the first round of the 2003 NHL Entry Draft. He is the younger brother of Buffalo Sabres, Colin Stuart. 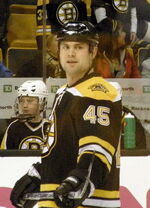 Stuart attended Colorado College in Colorado Springs for three years prior to going pro. Stuart likely would have left a year earlier had the NHL not been involved in a lockout. During his junior year, Stuart was the captain of the Tigers and led them to the NCAA Frozen Four, where they lost to eventual champion and in-state rival, the University of Denver.

On November 7, 2006, after undergoing off-season knee surgery, Stuart was sent down to the Boston Bruins' American Hockey League affiliate, the Providence Bruins for conditioning purposes until he was recalled by Boston on November 20, 2006.

After the conclusion of the 2007–08 Boston Bruins season, Mark Stuart was also selected to play in the 2008 IIHF World Ice Hockey Championships as a member of Team USA.[1] Also, as of April 26, 2008 Stuart was named to be one of the alternate captains for Team USA in the 2008 international event.[2]

On February 18, 2011, Stuart was traded by Boston to the Atlanta Thrashers along with Blake Wheeler for Rich Peverley and Boris Valabik.[3]

Retrieved from "https://icehockey.fandom.com/wiki/Mark_Stuart?oldid=270021"
Community content is available under CC-BY-SA unless otherwise noted.