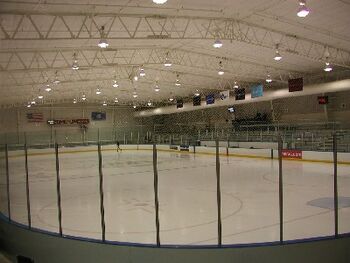 The Mark Edward Freitas Ice Forum is the home rink of the University of Connecticut Huskies. It was re-dedicated on February 5, 2005 during the UConn-Sacred Heart game, which UConn won 5-1.

It was constructed upon the same site of UConn's old outdoor rink that the program used before moving up to Division I. The rink itself is in the exact same spot as at the old rink. It opened in 1998, and up until 2005 was known as the UConn Ice Arena. It seats 2,000 and the rink is 200 feet by 85 feet.

It was the only sports facility built with money from the "UConn 2000" program in which the State of Connecticut pledged $1,000,000,000 in capitol improvements to the university starting in 1995.

The university is working on building a new arena to be built to the southwest of the present arena.  It is planned on opening in the fall of 2022 with a capacity of 3,500 with seating for 2,500.