From 1955 through 1964, 10 straight years, the Winnipeg Maroons were Manitoba’s only senior A hockey team. It was automatic, they represented Manitoba in Allan Cup playoffs. In 56-57, when the Maroons did not compete, Manitoba had no representative. During this time span the Maroons played a make shift schedule, representing Manitoba nine times, and winning three Patton Cups, as Western Canada Champion.

After the 64 season, the Maroons joined with the Canadian National Team, who had just relocated to Winnipeg. Needing an Allan Cup representative, Manitoba turned to the Manitoba Intermediate AA Hockey League.

For 65-66, the Manitoba Senior Hockey League was reborn, and the Maroons were back. The League lasted six seasons, but in its final season, only half of the Leagues 4 teams register as Seniors. The other half as Intermediate. This caused the Manitoba Amateur Hockey Association to pull the Provincial Championship.

The Maroons return was shorted lived, lasting only 2 seasons, before the team relocated to St. Boniface, becoming the St. Boniface Mohawks. The Maroons left as Manitoba champs in 67, and in 68, the Mohawks continued the winning tradition capturing both the Manitoba Championship, and the Western Canada title in their inaugural season. The Mohawks would go on to win 3 Manitoba Championships in their first 4 seasons.

In 69, Warroad Lakers became the first United States based team to win the Pattison Cup.

During the next four years, 1972-75, the Mohawks played off only once, against the East Kildonan Screaming Eagles in 73, for the Provincial crown. Representing Manitoba all four years, and winning the Patton Cup in 73.

For the next three years, 1992-94, the Warroad Lakers and the St. Boniface Mohawks played off for the Provincial Championship, Warroad won all three. Both played an exhibition schedule during the regular season. Prior to the 93-94 season, the Mohawks announced that ‘this year would be their last’. Warroad hosted the 94 Allan Cup, both the Lakers and Mohawks qualified and met in the championship game. Warroad won the Cup.

In 95 & 96, tournaments were held to crown a Provincial champion, with Warroad winning both. The Lakers would win their last championship in 97, defeating the Ile des Chenes North Stars in a Provincial playoff.

Warroad Lakers won three straight Allan Cups and were gunning for a four peat in their 50th and last year.

Ile des Chenes would represent Manitoba for the next two years, the province’s only senior team in 1998, and winning a play-off in 99 with Peguis Mohawks. 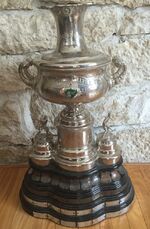 This category of hockey was called: