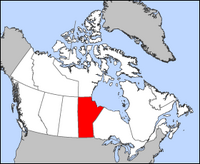 Manitoba is one of Canada's 10 provinces, with a population of 1,182,921 (2007) . It was officially recognized by the Federal Government in 1870 as separate from the Northwest Territories, and became the first Province created from the Territories. It is the eastern most of the three Prairie Provinces. The word "Manitoba" is etymologically related to the native word "manitou" which means spirit. Manitoba, in the Red River area, contained the first western colony and settlement area of Canada.


The Winnipeg Jets of the National Hockey League, play in Winnipeg at the MTS Centre. The Brandon Wheat Kings are longtime members of the Major Junior circuit, Western Hockey League. In Junior 'A', Manitoba boasts twelve teams, plus a Junior B, Junior C and Junior Womens loop. Manitoba also boasts 2 Midget AAA leagues, and in senior, 5 leagues.


Each season, Hockey Manitoba hosts the Minor Hockey Provincial Championships. Approximately 35 communites across the province host provincial tournaments as 400 team entries and 6,000 players compete for a chance to win a Provincial Championship. Various provincial categories are held in both male and female hockey in the Atom, Pee Wee, Bantam and Midget age divisions.

Retrieved from "https://icehockey.fandom.com/wiki/Manitoba?oldid=659361"
Community content is available under CC-BY-SA unless otherwise noted.