"Griffins" is the name of the sports teams of MacEwan University, formerly known as Grant MacEwan University and Grant MacEwan College, located in Edmonton, Alberta. MacEwan has been granted probationary status in the Canada West Universities Athletic Association (CWUAA). However, they were not admitted to the men's hockey league until the 2020-21 season. They operated a team in the Alberta Colleges Athletic Conference (ACAC) from 1998-99 to 2019-20.

The ACAC is affiliated with the Canadian Colleges Athletic Association (CCAA), the second tier of university/college sport in Canada. The Griffins have two ACAC titles. The CCAA has not held a national hockey playoff since 2001. The ACAC is currently the only college league in Canada. However, the British Columbia Intercollegiate Hockey League (BCIHL) includes college teams and the Réseau du sport étudiant du Québec (RSEQ) operates a league of mostly Cégep teams. 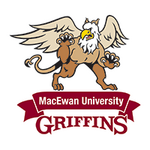 Retrieved from "https://icehockey.fandom.com/wiki/MacEwan_Griffins?oldid=712817"
Community content is available under CC-BY-SA unless otherwise noted.