The only other teams that he played for were the Montreal Canadiens, who called him up for three games when he scored an assist, and the Buffalo Bisons, with whom he played two games and scored a goal. 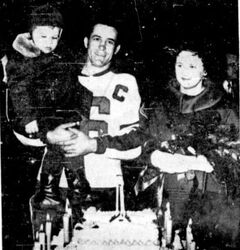 Denis, with his wife and daughter, was honored at the Royals' last game on March 19, 1961.
Add a photo to this gallery

Retrieved from "https://icehockey.fandom.com/wiki/Louis_Denis?oldid=591421"
Community content is available under CC-BY-SA unless otherwise noted.