The franchise was originally referred to as the "Los Angeles Aces", but took the "Sharks" name after the proposed San Francisco Sharks franchise (not to be confused with the current NHL San Jose Sharks) was transferred to Quebec and became the Nordiques before the WHA began play. 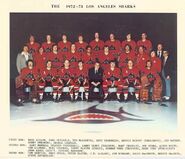