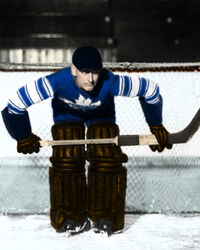 Lorne played in the National Hockey League from 1926 to 1937. During this time, he played for the New York Rangers, Toronto Maple Leafs, Montreal Canadiens, Chicago Blackhawks, Montreal Maroons, and New York Americans. Lorne won the 1935 Vezina Trophy for the being the league's best goaltender.

During his stint with the Rangers, Lester Patrick credited his name as Lorne Chabotsky, in an attempt to garner more Jewish fans. Chabot was also the goalie who was injured during the 1928 playoffs, forcing Patrick into the goal for the remainder of the game.

Years after his retirement, he suffered from severe arthritis and was bedridden. He developed Bright's Disease and after a long bout with it, he died, five days after his 46th birthday.

In 1998, he was ranked number 84 on The Hockey News' list of the 100 Greatest Hockey Players. He was the only player on the list then eligible for the Hockey Hall of Fame who has not been elected to it.