The team was disbanded after the International League announced it would merge with the Can-Am League on October 4, 1936.[3]

Several of the players also played in the National Hockey League: 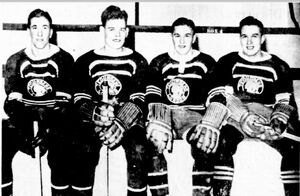 Retrieved from "https://icehockey.fandom.com/wiki/London_Panthers?oldid=372420"
Community content is available under CC-BY-SA unless otherwise noted.