This league was formed in 1938-39 to give some of the stronger junior teams in the Ottawa District better competition. They came from different parts of the District and had not normally played together.

The exception was Renfrew. Pembroke wanted Renfrew in the league.to minimize travel costs. Perth and Brockville agreed in order to have a better schedule.

The playoffs were predetermined before the schedule. Renfrew would enter the first round of the district Citizen Shield playoffs. Perth and Brockville would play off with the winner going against Pembroke, The winner of that series would have a bye into the Citizen Shield final.

This league only played this one season. The next year the Perth Blue Wings would play in the new Ottawa City & District Junior League.

The game on February 10 was played at Smiths Falls because there was no ice available in Brockville. 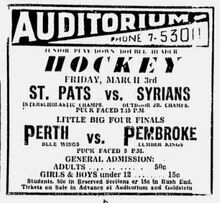