Leo Boivin began playing hockey at seven years of age on the rivers and outdoor ice surfaces of Prescott, Ontario, near Ottawa. He planned on being a defenceman since childhood, "because defencemen got to stay on the ice longer, got to play more." His junior career consisted of a year with the Inkerman Rockets and two more seasons with the Port Arthur West End Bruins. In 1951–52 he began playing for the AHL's Pittsburgh Hornets and was promoted to the Toronto Maple Leafs. Yet, Leo was most remembered for his time with the Boston Bruins as he helped lead them to two Stanley Cup finals in the late 50's. Although just 5' 7", he was considered a very tough opponent, as Tim Horton referred to him as "the toughest blueliner to beat in a one-on-one situation". He has also been called the last of the tooth-rattling body checkers.

Following his retirement in 1970, Boivin became a scout. He became an interim coach of the St. Louis Blues during the 1975–76 and 1977–78 seasons, and coached the Ottawa 67's of the Ontario Hockey League for a brief period, tutoring young defenceman Denis Potvin. Boivin was inducted into the Hockey Hall of Fame in 1986. 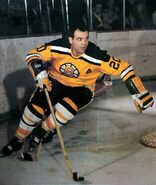