Ice Hockey Wiki
Register
Don't have an account?
Sign In
Advertisement
in: Articles without Wikidata item, Born in 1928, Barrie Flyers alumni,
and 14 more

Larry "Rock" Zeidel (born June 1, 1928 in Montreal, Quebec) is a retired Canadian professional ice hockey defenceman, most notably for the Hershey Bears of the American Hockey League, with which he played nine seasons.

He played for the Detroit Red Wings and Chicago Black Hawks in the early 1950s, and concluded his career with the Philadelphia Flyers in the late 1960s. In between, he played for numerous teams in the Western Hockey League and the American Hockey League.

He won a Stanley Cup in 1952 with the Detroit Red Wings. He won the Calder Cup in 1964 with the Cleveland Barons.

He promoted himself to all 1967 expansion franchises using a self-made promotion kit and resume, he subsequently drew the interest of the Philadelphia Flyers who signed him to a contract at age 39. While playing for the Philadelphia Flyers he was involved in a violent stick-swinging duel with Boston's Eddie Shack on March 7, 1968. 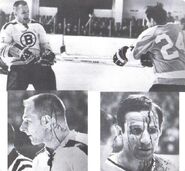