The Lanxess Arena (formerly known as Kölnarena, German for Cologne Arena) is an indoor [arena]] in Cologne, North Rhine-Westphalia, Germany. It is primarily used by Kölner Haie. Kölnarena opened in 1998 and can accommodate 20,000 spectators.

On June 2nd, 2008 it was announced that Kölnarena would be renamed to Lanxess Arena for a period of ten years. The sponsor, Lanxess AG, is a specialty chemicals group based in nearby Leverkusen.

The arena will be one of the venues for the 2010 IIHF World Championship, including both semi-finals, the Bronze medal game, and the Championship game. 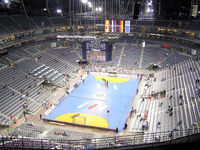 Retrieved from "https://icehockey.fandom.com/wiki/Lanxess_Arena?oldid=416028"
Community content is available under CC-BY-SA unless otherwise noted.