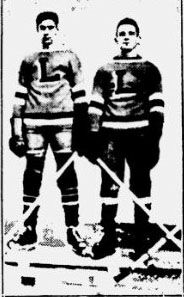 The Lafontaine Bleus were a senior and a junior team based in Montreal.

The following year the Bleus and the rest of the league jumped to senior status. The Bleus finished third. This senior league only lasted one season and folded.

The Bleus then applied to the Montreal Senior Group. Their application in early October was refused. However, at the end of the month the Montreal Columbus Club withdrew and the Bleus were accepted as a replacement. By then, Lafontaine had lost many of its players to other teams.

In three years of play in the new league, the Bleus finished in last place. They then folded.

There was a revival of the team in the Provincial Senior League in 1937-38 but that lasted only a year.

Bleus who played in the NHL[edit | edit source]

Retrieved from "https://icehockey.fandom.com/wiki/Lafontaine_Bleus?oldid=697566"
Community content is available under CC-BY-SA unless otherwise noted.