The voting is conducted at the end of the regular season by members of the Professional Hockey Writers Association, and each individual voter ranks their top five candidates on a 10-7-5-3-1 points system.[2] Three finalists are named and the trophy is awarded at the NHL Awards ceremony after the Stanley Cup Playoffs.

The trophy is named in honour of Marie Evelyn Moreton (Lady Byng), wife of Viscount Byng of Vimy, a Vimy Ridge war hero who was Governor General of Canada from 1921 to 1926. Lady Byng, who was an avid hockey fan, decided to donate the trophy to the NHL in 1925.[3]

She decided the trophy's first winner would be Frank Nighbor of the Ottawa Senators. Late in the season, Lady Byng invited Nighbor to Rideau Hall, showed him the trophy, and asked him if the NHL would accept it as an award for its most gentlemanly player. When Nighbor said he thought it would, Lady Byng, much to Nighbor's surprise, awarded him the trophy.[4][5]

After Frank Boucher of the New York Rangers won the award seven times within eight years, Lady Byng was so impressed that she gave him the original trophy to keep. Lady Byng then donated a second trophy in 1935–36. When Lady Byng died in 1949 the NHL presented another trophy and changed the official name to the Lady Byng Memorial Trophy.[3] In 1962, the original trophy was destroyed in a fire at Boucher's home.[6]

Besides Boucher, a number of players have won the award multiple times, including Wayne Gretzky who won it five times, Red Kelly and Pavel Datsyuk with four wins, and Bobby Bauer, Alex Delvecchio, Mike Bossy and Ron Francis with three each. Because of Boucher's seven wins, the New York Rangers join Detroit as the only two clubs who have won the award fourteen times, followed by Toronto with nine wins, Chicago and Boston tied with eight, and Los Angeles with five.[7]

Bill Quackenbush and Red Kelly are the only defensemen to have won the Lady Byng Trophy, with Kelly being the only one to win it multiple (3 as a defenseman, 4 overall) times. No defenseman has won in over fifty years; the closest this came to happening was in 2001 when Nicklas Lidström narrowly lost to Joe Sakic. No goaltender has ever won the award. 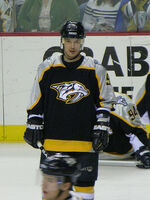 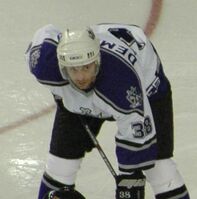 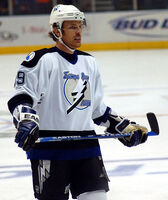 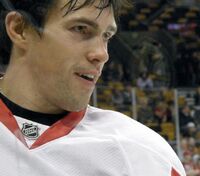 Retrieved from "https://icehockey.fandom.com/wiki/Lady_Byng_Memorial_Trophy?oldid=286659"
Community content is available under CC-BY-SA unless otherwise noted.