The Kraut Line (short for Sauerkraut Line) was the term used to describe a trio of hockey players who played on the same NHL forward line who were members of the Boston Bruins hockey team: center Milt Schmidt, left wing Woody Dumart, and right winger Bobby Bauer.

The name was devised by Albert Leduc, a player from the Montreal Canadiens between 1925 and 1933, and references the German descent of all three players, all of whom grew up in Kitchener, Ontario.

The three were famously attached and lived together in a single room in Brookline, Massachusetts. This line was so accomplished that in the 1939–1940 season, the trio was 1–2–3 in NHL scoring. Center Milt Schmidt lead the league in scoring with 22 goals and 30 assists; left wing Woody Dumart was second in the league with 22 goals and 21 assists; and third in scoring was right wing Bobby Bauer with 17 goals and 26 assists. While the line was intact, the Boston Bruins would win the Stanley Cup championship in the 1938–1939 and 1940–1941 seasons.

In the midst of World War II, the line enlisted with the Royal Canadian Air Force as a trio from 1942 to 1946. The last game before the Kraut Line reported for duty was held on February 10, 1942 before a crowd of 10,400 at Boston Garden. It was the last home appearance of the Bruins, who would be traveling for two weeks, and the final regular-season visit of the Montreal Canadiens. At the end of the first period, the Bruins already led 2-1 with Toe Blake scoring the only Canadiens goal. Dumart scored the Bruins’ third goal (with both linemates assisting) at 16:52 of the second session. Schmidt assisted Jack Shewchuk in scoring only eleven seconds later. Within the first seven minutes of the third period, the Bruins doubled their score. Bauer scored the first two back-to-back at 1:15 and 1:29. Dumart assisted on both and Schmidt on the second. At 6:19, both Bauer and Dumart assisted Des Smith on the final goal of the game. According to the Boston Globe, “The trio worked like fury to set up Schmidty in the closing minutes and once succeeded only to have the play ruled offside.” All told, the Kraut Line wings each had four points while their center had three. Their combined 11 points accounted for exactly half of the Bruins’ total points in their 8-1 victory.

After the game, the three RCAF men were feted on the ice and off. In the midst of “terrific ovations,” they were placed at center ice. Bruins management presented them each with full-season paychecks and bonuses. General manager Art Ross, presented by his sons (John Ross and Pilot Officer Arthur Ross Jr. of the RCAF), gave them chronograph watches. Ross called them “the most loyal and courageous players in the Bruins history.” The Boston Globe reported, “Farewell messages from Lieut. Adams and Ross were read by Secretary Frank Ryan. Both stressed the loyalty of the Krauts to the Bruins, confidence they will perform even more brilliantly in the greater conflict and hope that the trio will soon return to the hockey wars.” Finally, their Bruins teammates gave them engraved bracelets, solid gold identification tags. Bauer said over the loudspeakers, "I have never been more speechless in my life. You will all be proud of us."

As the organ played and the crowd sang “Auld Lang Syne,” both the Bruins and the Canadiens shouldered the Kraut Line and carried them off the ice. Schmidt never forgot what that night meant to them. “It just goes to show that you can have pretty bitter enemies out on that ice, but after the game is over, we’re all friends, and I think that has a lot to say about the people who play the game.”

They then helped the Ottawa RCAF Flyers win the Allan Cup in 1942. During the war, contests were held to change towards a non-Germanic name for the line, with The Kitchener Kids one of the favorites, but at the war's end the name returned.

Bobby Bauer's retirement in 1947 ended the line. Kraut Line night was celebrated at the Boston Garden before the March 18, 1952 game versus the Chicago Blackhawks. Having last played in the NHL 5 years previously, 37 year old Bobby Bauer came out of retirement and played in the game. With the Bruins up 1-0, Milt Schmidt scored his 200th career goal, assisted by Woody Dumart and Bauer. Bauer then added a goal (assisted by Schmidt and Real Chevrefils) and then Schmidt assisted on a goal by Chevrefils in Boston's 4-0 blanking of Chicago. Dave Creighton wore jersey #4 so that Bauer can wear the #17 he made famous.

Note: These are statistics from the seven regular seasons in which the three players generally played on the same line. 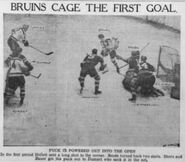 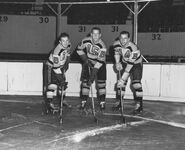 The Bostonians defeats the Red Wings at the Stanley Cup in the Olympia stadium, D...HD Stock Footage
Community content is available under CC-BY-SA unless otherwise noted.
Advertisement