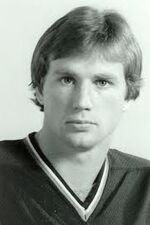 played 3 years of junior hockey in the WCHL before making the leap to professional. ... signed with the Indianapolis (WHA) as a free agent in 1975. ... set WHA records for most penalty minutes by a rookie and a defenseman in his first year. ... spent 2 seasons in Indianapolis, setting franchise records for most penalty minutes in a game (34), season (351), and career (519). ... traded to the powerhouse Winnipeg Jets in 1977. ... was the muscle behind a very talented squad that won 2 straight championships. ... set Winnipeg (WHA) franchise records for most penalty minutes in a season (210) and career (413). ... with the WHA / NHL merger, was re-claimed by Pittsburgh. ... left unprotected in the Expansion Draft, was a fill for the Penguins, after Colin Campbell was selected by Edmonton. ... fought Stan Jonathan and Al Secord in first period of his first NHL game, October 14, 1979 at Boston. ... led the Penguins in penalty minutes. ... sent to Quebec as compensation for the Penguins signing of free agent Paul Baxter. ... suited up for 61 games with the Nordiques, before calling it a career. ... never played in minor leagues. ... returned to Pittsburgh after retirement and went into commercial real estate business. ... has the dubious honour of most games in a career without scoring a goal.