Kenneth Armstrong Kilrea (b. January 16, 1919 in Ottawa, Ontario - d. January 14, 1990) is a retired professional ice hockey player who played 91 games in the National Hockey League with the Detroit Red Wings.

He made it to only one game with the Wings in 1938-39 but that increased to 40 games the next season. He split the next two seasons between the Wings and their Indianapolis Capitals farm team.

Kilrea played in the minor pros and senior hockey until his retirement in 1951. 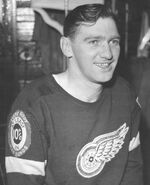 Ken Kilrea sporting a War Bonds patch during the 1943-44 season.
Add a photo to this gallery

Retrieved from "https://icehockey.fandom.com/wiki/Ken_Kilrea?oldid=668407"
Community content is available under CC-BY-SA unless otherwise noted.