The Patrick J. Kelly Cup goes to the play-off champion of the ECHL. The Kelly Cup has been awarded to teams since 1997. Prior to 1997, the playoff winner was awarded the Riley Cup, named after former American Hockey League President Jack Riley. The current cup is named after Patrick J. Kelly, the league's first commissioner. The cup is loaned to the winning team for one year and is returned at the start of the following year's playoffs.[1] The Kelly Cup Playoffs Most Valuable Player award is also given out as part of the Kelly Cup Championship ceremonies. Nick Vitucci and Dave Gagnon are the only players to win the award on multiple occasions.[2]

17 different teams have won the ECHL Championship, with seven (Colorado, Norfolk, Toledo, South Carolina, Cincinnati, and Idaho) winning multiple times. The Norfolk Admirals (then known as Hampton Roads during its first ECHL run), the Alaska Aces and the South Carolina Stingrays hold the record for most championships won with three.[3] 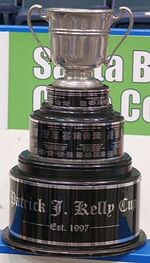