John William Bower (b. November 8th 1924 in Prince Albert, Saskatchewan, Canada; d. December 26, 2017 in Toronto, Ontario) was a Canadian professional goaltender who played in the National Hockey League for the New York Rangers and the Toronto Maple Leafs.

Veteran of the Second World War, Bower returned home from England where he served in the Canadian Army to play for his home Prince Albert Blackhawks junior team. The following season, Bower joined the American Hockey League's Providence Reds. He would play a single game for the Reds before joining the Cleveland Barons, where he would play eight seasons.

The New York Rangers showed interest in Bower and signed him in 1953. However, he was sent down to the Vancouver Canucks of the defunct Western Hockey League. Bower returned to the Providence Reds the next season, winning the Calder Cup.

In 1958, the Toronto Maple Leafs claim Bower. There, he could finally enjoy regular NHL action for eleven seasons, winning the Vezina Trophy twice and the Stanley Cup four times. 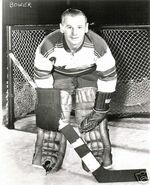 Bower with the New York Rangers.