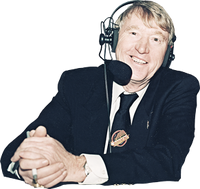 Jim Robson (born January 17, 1935 in Prince Albert, Saskatchewan) was a radio and television broadcaster for the Vancouver Canucks from 1970 to 1999.[1] His family moved to British Columbia when he was eight years old and he eventually graduated from Maple Ridge Secondary School.

By 1956, Robson found himself in Vancouver covering the BC Lions football team, the Vancouver Mounties baseball team and the then WHL Vancouver Canucks hockey team on CKWX.

When the Vancouver Canucks became an NHL expansion team in 1970, Robson moved to CKNW where he was known as the voice of the Canucks for nearly three decades. For the first seven years, he usually worked alone. For road games, he would broadcast the game without a colour commentator and also provide the pre-game, intermission, and post-game shows. In 1977–78, he began working alongside former BC Lions player and broadcaster Tom Larscheid. From 1983–84 until 1987–88, his broadcast mate was ex-Canuck Garry Monahan, before Larscheid returned in 1988–89.

Robson stepped down as the radio voice of the Canucks in 1994, choosing the lighter workload of television. His last radio broadcast was Game 7 of the 1994 Stanley Cup Finals between the Canucks and New York Rangers. Robson continued as the Canucks television voice for five additional seasons, working alongside colour commentators Darcy Rota (1994–95 to 1995–96) and Ryan Walter (1996–97 to 1998–99). His replacement on radio was Jim Hughson, who later moved to Rogers Sportsnet, and then to CBC's Hockey Night in Canada. John Shorthouse now shares radio play-by-play for the team with Rick Ball and Joey Kenward who each work alongside Larscheid. When games are carried on Sportsnet, Shorthouse works on the TV end beside former Canucks goaltender John Garrett.

Jim Robson also did additional work for CBC's Hockey Night in Canada, covering games primarily from[western Canada. It was for HNIC that he broadcast the Canucks' first NHL game, a 3–1 home loss to the Los Angeles Kings on October 9, 1970. His reputation as one of the top broadcasters in the business became apparent and he was assigned to the 1975, 1980 Stanley Cup Finals and {{1984 Stanley Cup Finals]], which involved the Canucks, as they faced off against the New York Islanders. That year, he called the series when it was at the Nassau Coliseum on the radio with Larscheid. However, when the series was in Vancouver, he called the games on the CBC with Gary Dornhoefer and Howie Meeker.

In addition, he covered the NHL All-Star Games in 1977 (Vancouver), 1981 (Los Angeles), and 1983 (Long Island). He left HNIC after the 1984–85 season, but made a couple of national appearances afterward, for CBC in the 1987 playoffs and the Global Television Network for the 1988 Smythe Division Final between the Edmonton Oilers and Calgary Flames.

He also covered the Vancouver Canucks on television broadcasts on various local stations from 1985–86 through 1998–99. From 1987–88 to 1993–94, Robson provided both radio and television play-by-play for the Canucks on simulcasts, alongside colour commentators Monahan and Larscheid.

Nationally, Jim Robson is probably best remembered for his call of Bob Nystrom's Cup-winning overtime goal for the Islanders in the 1980 Stanley Cup Finals. Locally, his voice is linked to every significant Canucks moment in the '70s, '80s, and '90s, particularly the 1981–82 and 1994 Stanley Cup Playoffs.

Off-the-air, Jim was involved in the community being in-demand as a guest speaker for numerous fund-raising dinners and banquets throughout the province of British Columbia. He served as a Director of the BC Benevolent Hockey Association and the Canucks Alumni.

In 2002, at the Canadian Association of Broadcasters annual meeting in Vancouver, Jim Robson was inducted to the Canadian Broadcast Hall of Fame.[1]

The Broadcast booth in GM Place is named after him.

Retrieved from "https://icehockey.fandom.com/wiki/Jim_Robson?oldid=541494"
Community content is available under CC-BY-SA unless otherwise noted.