Sports teams based in the Coliseum included the Jacksonville Lizard Kings ice hockey team; the American Basketball Association franchise known as The Floridians played some of its home games there in 1971 and 1972. 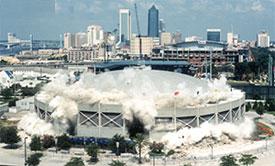 The Coliseum was demolished in 2003 and replaced with the Jacksonville Veterans Memorial Arena. Extreme care was taken not to damage the black granite Veterans Memorial Wall located just eight feet from east wall of the building. After the debris was cleared, a 2 acre walking park was added to the area around the Memorial.

Retrieved from "https://icehockey.fandom.com/wiki/Jacksonville_Memorial_Coliseum?oldid=657959"
Community content is available under CC-BY-SA unless otherwise noted.