He started out in junior hockey with the St Michaels College, winning the Memorial Cup in 1934. In 1935-36 Crawford switched to the West Toronto Nationals where he won a second Memorial Cup.

After part of a season with the Providence Reds, Crawford started his National Hockey League career with the Boston Bruins in 1938. He would also play his entire career with the Bruins and retired after the 1950 season. In 1943 and 1946, he was a member of the NHL All-Star Team. He would win the Stanley Cup twice with Boston in 1939 and 1941.

In 1950 he joined the Hershey Bears as a player-coach for two years. He retired as a player in 1952.

Cowley, Clapper and Crawford with the Cup in Boston, 1941.

Jack Crawford in the gold jersey introduced in 1940. 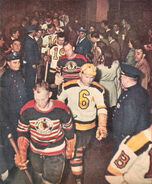 Hawks Robert "Red" Hamill and Bruins Jack Crawford head onto the ice in an early 1948 game. 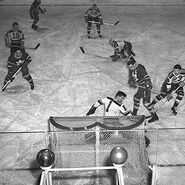 Jack Crawford clears the puck away from Leafs #4 Harry Watson while goalie Frank Brimsek, #9 Jimmy Peters and Pat Egan watch during the 1949 Semi-finals.
Add a photo to this gallery

Retrieved from "https://icehockey.fandom.com/wiki/Jack_Crawford?oldid=673369"
Community content is available under CC-BY-SA unless otherwise noted.