Ice Hockey Wiki
Register
Don't have an account?
Sign In
Advertisement
in: Born in 1907, Dead in 1990, Boston Bruins players,
and 10 more

He played senior hockey for the Edmonton Superiors from 1925 to 1928 and then turned pro with the Vancouver Lions in 1928-29. Through a complicated procedure, he was signed by the Boston Bruins in 1930 and embarked upon a seven and a half year career with that team. In 1931-32 he missed all but one game because of a broken leg.

In the middle of the 1937-38 season he was traded to the Detroit Red Wings for Gord Pettinger and then later that same season was sent to the New York Americans for Joe Lamb. In 1938-39 he was sent down to the New Haven Eagles and retired at the end of the season.

Beattie made a comeback with a Vancouver amateur team in 1941-42 and played for the Victoria Military Depot team in 1942-43 before retiring for good.

In the NHL Beattie played in 334 games and scored 62 goals and 85 assists. 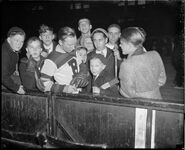 Article on Hooley Smith in which Red Beattie is mentioned as team captain, November 10, 1936.

Action from Game 1 of the 1938 Quarter-finals Rangers-Americans game on March 22, 1938. Two different views of a goal by Jack Beattie which tied the game in the second period are shown. The Americans won 2-1 in double overtime on a goal by John Sorrell.