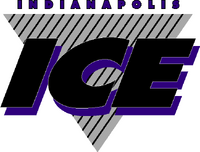 The Indianapolis Ice is the name of a former hockey team in Indianapolis, Indiana that played in the International Hockey League from 1988–99 and in the Central Hockey League from 1999–2004. Their original home arena was the Indiana State Fair Coliseum at the Indiana State Fairgrounds on the city's near-northeast side. They subsequently played at Market Square Arena. Once Market Square Arena was imploded, a few home games were played at Conseco Fieldhouse downtown each year, with the majority played at the Pepsi Coliseum. Their major rivals during the 1990s were the Fort Wayne Komets. The team may be best known for letting former NBA player Manute Bol suit up for one game, mostly as a publicity stunt. Bol never took the ice for the game he was scheduled to play because of equipment problems.

In 2004, a new team named the Indiana Ice came into existence in the United States Hockey League, after the CHL Ice moved to Topeka. The team also plays at Pepsi Coliseum & Conseco Fieldhouse.

Retrieved from "https://icehockey.fandom.com/wiki/Indianapolis_Ice?oldid=317297"
Community content is available under CC-BY-SA unless otherwise noted.