The men's tournament in ice hockey at the 2014 Winter Olympics was held in Sochi, Russia between 12–23 February 2014. For the fifth consecutive Olympics, players from the National Hockey League participated. Twelve countries qualified for the tournament; nine of them did so automatically by virtue of their ranking by the International Ice Hockey Federation, while the three others took part in a qualification tournament.

With the gold medal, Canada became the first men's team to successfully defend an Olympic title since the Soviet Union in 1988 and the first team to finish the tournament undefeated since 1984.[2][3]

Canada surrendered only 3 goals in six games, the fewest allowed by a gold medallist since 1928 when Canada completely shut out the opposition in a 3-game tournament. Canada also scored only 17 goals, the fewest by a gold medal-winning team in Olympic history, although Great Britain averaged fewer goals per game at the 1936 Winter Olympics (19 goals in 8 games).

The IIHF selected 14 referees and 14 linesmen to work the 2014 Winter Olympics. They were the following:[5]

In each group, teams will be ranked according to the following criteria:[6]

Following the completion of the preliminary round, all teams were ranked 1D through 12D. To determine this ranking, the following criteria were used in the order presented:[6]

The top four ranked teams (1D–4D) received byes and were deemed the home team in the quarterfinals as they are seeded to advance, with the remaining eight teams (5D–12D) playing qualification playoff games as follows.

Teams seeded D1 to D4 are the home teams.

Canada won the game 3-0 with goals from Jonathan Toews, Sidney Crosby and Chris Kunitz,[7] each scoring their first goal of the tournament.[8] Canada shut Sweden out with an overpowering defense limiting them to 24 shots, and Canada's goalkeeper Carey Price played well when needed.[9] The Canadian team's executive director Steve Yzerman called the performance in Sochi the finest defensive effort ever for a Canadian team.[10] Canada shut out its opponents in semifinals and the final and allowed only three goals in 6 games. It was also the first time since 1928 that a Canadian team had gone undefeated.[8]

The win represented Canada's second consecutive men's gold in ice hockey, and the third time in four Olympics that Canada won both men's and women's gold in hockey. Canada had not won back-to-back men's golds since 1948 and 1952, and no nation had done it since the Soviet Union in 1984 and 1988.[8]

The game was a national phenomenon in Canada, with more 15 million Canadians watching at least part of the game.[11] Several provinces and cities relaxed their liquor laws to allow bars to open as early as 4am.[12]

The final standings of the tournament according to the IIHF. :[13]

Rankings based upon points, and sorted by goals.[14]

Goalkeepers with 40% or more of their team's total minutes, ranked by save percentage.[15] 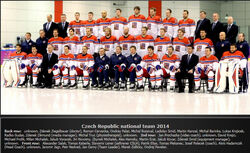 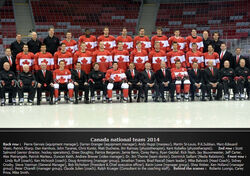 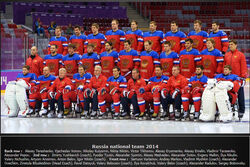 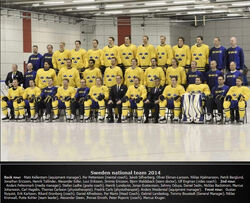 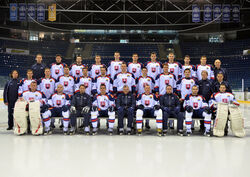 Slovakia
Add a photo to this gallery

Retrieved from "https://icehockey.fandom.com/wiki/Ice_hockey_at_the_2014_Winter_Olympics_%E2%80%93_Men%27s_tournament?oldid=643635"
Community content is available under CC-BY-SA unless otherwise noted.