Ice Hockey Wiki
Register
Don't have an account?
Sign In
Advertisement
in: Ice hockey at the 2010 Winter Olympics, 2010 in hockey, Olympic Games

The men's tournament in ice hockey at the 2010 Winter Olympics was held in Vancouver, British Columbia, Canada, 16 to 28 February 2010. Games were hosted at two venues – Canada Hockey Place (renamed from "General Motors Place" for the Olympics) and UBC Thunderbird Arena. It was the fourth time since the 1998 Winter Olympics in Nagano that National Hockey League players have been eligible to compete. These Olympics were the first to take place in a city with an NHL team since then, which meant players on the Vancouver Canucks who were competing in the Olympics were playing in their home arena.

During the tournament, Teemu Selänne of Finland became the all-time leader for points scored in the Olympics. He notched an assist in his second game of the tournament for 37 career points, surpassing Valeri Kharlamov of the Soviet Union, Vlastimil Bubnik of Czechoslovakia, and Harry Watson of Canada. Sweden's goaltender Henrik Lundqvist set a modern-day Olympic shutout streak record of 172 minutes and 34 seconds, continuous from the final of the gold medal game of the 2006 Olympics until Sweden's quarterfinal against Slovakia.

In the gold medal game, Sidney Crosby scored the game-winning goal seven minutes and forty seconds into overtime for Canada in a 3–2 win against the United States.

The final standings of the tournament according to the IIHF:

Points to each team are awarded as follows:

If two or more teams are tied in points, the following tiebreaker criteria will be used:

If a criterion leaves only two teams tied, then those teams will be ranked based on their head-to-head result.

Following the completion of the preliminary round, all teams will be ranked 1D through 12D. To determine this ranking, the following criteria will be used in the order presented:

Ranking after preliminary round

The top four ranked teams (1D–4D) received byes to and were deemed the home team in the quarterfinals as they are seeded to advance, with the remaining eight teams (5D–12D) playing qualification playoff games as follows:

Should the score remain even after regulation an overtime period of at most ten minutes is to be played. Should neither team score, a shoot out of three rounds of penalty shots decides the winner. The four winners of these qualification playoff games advanced to the quarterfinal round, while the losers of the qualification playoff games received a final ranking of 9 through 12 based on their preliminary round ranking.

All times are local (UTC-8)

Teams seeded D1 to D4 are the home teams. Should the teams be tied after 60 minutes of regulation, an overtime period of at most ten minutes would decide the winner immediately upon the next goal. If the game remains tied after the overtime period, an penalty shot competition determines the winning team.

(The losing team is awarded the silver medal.)

The referees for the final were Bill McCreary (Canada) and Dan O'Halloran (Canada), while the linesmen were Stefan Fonselius (Finland) and Jean Morin (Canada).

The gold medal game drew a big hockey audience in both Canada and the United States.

In Canada, the game drew an average 16.6 million viewers while 26.5 million Canadians watched at least part of the game. Canada's Olympic Broadcast Media Consortium claims that 22 million people – or two thirds of the Canadian population – were watching the gold medal game when Sidney Crosby scored in overtime, making the game the most-watched television broadcast in Canadian history. However, a new ratings system intended to better track out-of-home viewership was only implemented in August 2009, making it difficult to accurately compare these results with ratings prior to that date – specifically, the 2002 Canada-USA gold medal game in Salt Lake City, the record holder under the previous system. There was some speculation that the final game of the 1972 Summit Series had as many as 18 million viewers, although recently-recovered Nielsen ratings archives indicate that only 4.255 million Canadians watched that game live.

In the United States, NBC said that the game was the most-watched hockey game in the U.S. in 30 years, drawing 27.6 million, the largest since the United States-Finland game at the 1980 Olympics.

Rankings based upon points

Goalkeepers with 40% or more of their team's total minutes.

The tournament all-star team was voted on by the international media at the conclusion of the event. The following players were named:

The games were officiated, according to the IIHF rules, by the following: 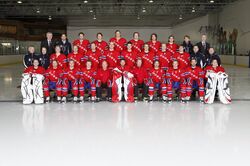